The Israeli experimental trio EFT (Electro Free Trio), which consists of guitarist Ido Bukelman, electronics manipulator Daniel Davidovsky and drummer Ofer Bymel, released its debut album recently on the excellent OutNow label. Probably the most adventurous music ensemble on the local scene, the trio presents a completely unique amalgam of Noise, high power distorted Rock, Jazzy improvisations and a plethora of electronically generated sounds, all these spontaneously created during a process of telepathic musical conversation. Although basically belonging to the Improvised Music genre, the music is somewhat different from the typical IM setting, which usually originates in Jazz, as it is more related to Rock and its experimental area. Of course the nature of such personal and intimate music is often completely impenetrable and remains valid mostly to its creators. The music presented here, although often difficult and definitely nontrivial, manages to be communicative to those, who are ready to make the intellectual effort and open their ears and minds. One must of course commend the courage and determination of these young musicians to create such highly distinctive music, risking alienation and misinterpretation by critics and audiences alike. It´s great to have such music recorded and released, against all odds, and hopefully in time the circle of connoisseurs able and willing to make an intellectual effort it requires will steadily grow. This is an album definitely worth investigating, especially for those more adventurous listeners out there!
Posted by Ofer Bymel at 3:54 AM No comments:

http://nycjazzrecord.com/
Posted by Ofer Bymel at 3:52 AM No comments:

Email ThisBlogThis!Share to TwitterShare to FacebookShare to Pinterest
the radio show from brighton, that played one of EFT's tracks off the new album!!!

Fierce guitar-fueled improvisation from Tel Aviv
but where Ido Bukelman drops off and Daniel Davidovsky
steps in on electronics is blurred beautifully.
Often I bolted my ears to Ofer Bymel’s drums, and
then just enjoyed the ride through shrill hills of
feedback and lightning sprawls of sound. On the
closing track, Bukelman lays down the electric guitar
to jangle mangle on acoustic for a bit, drifting
into a softer phase of harmonics versus miniature
dissonants. The guitar ramps up with a spanish
frenzy, Bymel spinning bicycle gears into the
mix, and Davidovsky casting a subtle wailing pall
over the piece. That and “Teething” were the two
more mellow pieces, the latter a great showcase
of Davidovsky’s mastery over chaos. “Soul Cramp”
is a nice rise and fall in dynamics. “Step Your
Mind” prolongs the tense excitement of a horse
ready to burst out of the blocks, a dominant
humming drone holding back the sonic onslaught.
This is the KFJC debut for Bukelman and Out Now
Recordings, with plenty more to come!??

Email ThisBlogThis!Share to TwitterShare to FacebookShare to Pinterest
EFT mentioned on 'honorable mentions' list of albums of 2011 at Avant Music News! RESHPECT
http://avantmusicnews.com/2011/12/12/avant-music-news-best-of-2011/

Posted by Ofer Bymel at 3:46 AM No comments: 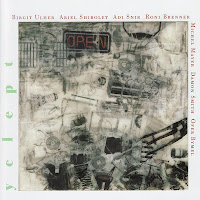 "Yclept"
Players: Ulher / Shibolet / Snir / Brenner / Meyer / Smith / Bymel
Balance Point Acoustics, BPA014
Reviewed by: Johan Redin
In addition to the duo with Gino Robair, Blips and Ifs, yet another album with Birgit Ulher has recently been released: Yclept, together with the American bassist Damon Smith and a bunch of Israeli musicians: Adi Snir on tenor and soprano saxophones, Roni Brenner and Michel Mayer on guitars and Ofer Bymel on percussion and Ariel Shibolet on soprano sax (tracks 4 and 6 only). The recording took place in Tel Aviv last year and proves to be an outstanding set of musical creativity. It is in other words quite a large ensemble and there are many things happening on all fronts. But there is room enough for everyone, with a fine balance of higher and lower register (the record is by the way exceptionally mastered). Smith plays a very physical bass; he knocks it, wrenches its strings, so you get full aware of its body. Ulher’s trumpet clicks and hisses on its distinctive way and the fact that there are two guitarists also turn out with great success I think. The mixture of wind and strings increases the intensity in such a way that any uncertainty produces ideal opportunities for the development. The effect is short and long passages that generates a sort of inward and outward movements to the improvised music, something that is quite difficult to manage in larger ensembles, and especially since this is their first get together. Ofer Bymels plying also impresses me, sparse and suddenly explosive in the tradition of Paul Lovens, but with individuality and innovative moves.
Yclept is a meeting of Tel Aviv, San Francisco and Hamburg – quite an unusual map with many cultural differences. But, as Klaus Janek emphasize in his liner notes, it is as evident as it is incredible that they all speak the very same language, instantly. For those who doubt this, just listen to the fifth track (they have no titles) where an almost frightening timing and perceptiveness develops into a musical discourse where all voices are of equal importance and all gestures immediate.
Originally in Swedish on soundofmusic.nu 2009-11-06 --

"Yclept"
Players: Ulher / Shibolet / Snir / Brenner / Meyer / Smith / Bymel Yclept
Balance Point Acoustics, BPA014
Reviewed by: Clifford Allen - Paris Transatlantic
From the first meaty whoomph of Damon Smith's arco bass, one is keenly aware of a strong connection to bassists like Peter Kowald and Buschi Niebergall. There's a workman-like physicality of horsehair on strings, as well as a muscular and bodily presence that, despite its massiveness; is almost balletic in its motions. Oakland-based Smith readily acknowledges the influence of the German bassists; his first audio experience of freely improvised bass was Kowald's FMP LP Duos: Europa. With percussionist Weasel Walter, he's crafted an approach that balances perilously between careening expressiveness and exacting detail. But the "violent rage" that characterizes a Walter disc is only one facet of Damon Smith's work. Witness Yclept, his latest collaboration with Tel Aviv saxophonist Ariel Shibolet and Hamburg trumpeter Birgit Ulher, herself a master carver of miniscule brassy flutters and gut-wrenching wails. The three are joined across seven improvisations by a group of musicians little known outside Israel: guitarists Roni Brenner and Michel Mayer, percussionist Ofer Bymel and saxophonist Adi Snir. Groans, flutters and stuttering yelps jab and dive at one another across these sonic canvases, supported by long, crisp howls of bowed harmonics. Smith is the most identifiable colour here, a craggy yet humanistic brown amid the whitish-silver flecks of reed (?) chirps and brassy pops and clucks. The guitars seem to be prepared, contributing feedback and electrified plinks; like Bymel's snare and thick brushes, they fill the soundscape with spiky, pointillist gestures. The sixth section is certainly the most traditional, guitar scrapes and towel-damped toms shadowing urgent long tones. It's something ineffable that makes an "improv" recording (i.e., not jazz or free-jazz) sing – one just knows when that sweet spot gets hit. Yclept is definitely an example of the indefinable "it."–CA
"Yclept" can be purchased through www.BalancePointAcoustics.com or by directly contacting oferbymel[at]gmail.com
Posted by Ofer Bymel at 8:52 AM No comments: